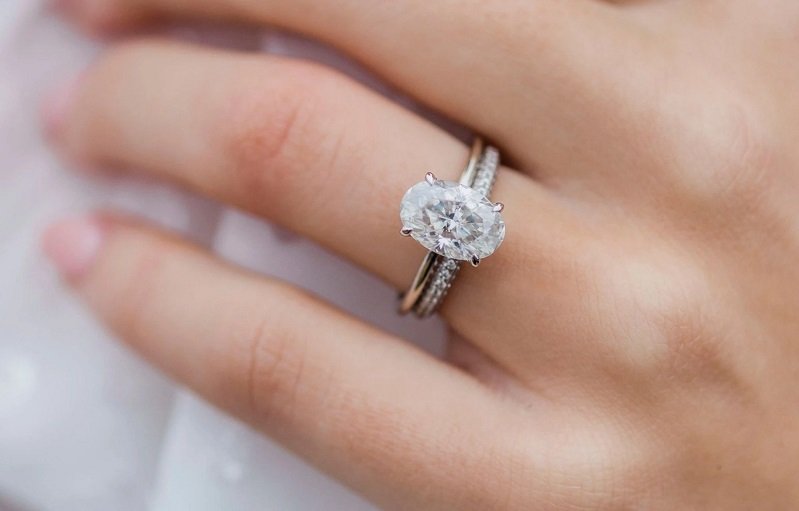 The Secrets of the Moissanite Wedding Rings

Moissanite is an extremely rare artificial gemstone. Natural microscopic particles were first discovered in Arizona, in a crater created by a meteorite that fell to earth, by a French scientist named Henri Moissan. It was then created in the laboratory and cut by the American company Charles & Colvard. It has diamond-like properties such as color and hardness; on the other hand it has much greater fire, sparkle and luster than that of a diamond. It is an ideal center stone for engagement rings. They are cut in many classic shapes such as round and oval, and more original ones such as asscher, marquise, pear and heart moissanite. The Moissanite Wedding Rings now enjoy high popularity.

The visual characteristics of moissanite make it a unique category of stone; it has a hardness of 9.5 on the Mohs scale which makes it the second hardest stone after diamond, so it is very solid, shock and scratch resistant. Its refractive index is very high (2.65 to 2.69) and therefore higher than that of diamond, which gives moissanite an exceptional sparkle. The scattering of light through the stone is also important, thus the light passes through the gem and separates into rainbow colors called fire. Moissanite is resistant to high heat temperatures, so it will not undergo any alteration in color or composition during repair.

Moissanite is easily made in the laboratory, however the gem quality used in jewelry and jewelry has required several years of research to develop the manufacturing process which allows for a hard, shiny stone with a white color similar to diamond. Moissanite is a rare artificial stone, since it takes two to three months to produce a single gem. Learn about the process of making moissanite to better understand the reason for its rarity and why it is not considered a synthetic stone.

How to recognize a moissanite?

The difference between a diamond and a moissanite is not visible to the naked eye. Moissanite is so similar to diamond, that tests performed with basic gemological equipment cannot detect the differences between a moissanite and a diamond. However, with a keen eye and a magnifying glass of 10x magnification, you can detect the only optical element that sets them apart, called double refraction.

Double refraction means that when a ray of light enters the gemstone, it is slowed down, bent, and split into two rays of light, and then it creates a double facet. The best way to observe this double facet is to hold the gemstone so that you can see the culet the angle of the crown facet. This optical effect is manifested by a secondary blurred image which is particularly visible at this location. Repeat this test again varying the angle of inclination; if the doubling reappears you can confirm your weightings.

The reason is its strong birefringence of between 0.030 and 0.045 and a dispersion index of 0.104 much higher than that of diamond known at 0.044. Indeed, under the magnifying glass, the junctions of the facets of a diamond are sharp and sharp.

Difference between moissanite and diamond

The craze for moissanites has grown in recent years. An impressive number of couples are worn by purchasing an engagement ring with a moissanite center stone. It offers more options for choosing more complex designs and larger stones.

Unlike many stones which darken over time, moissanite retains its luster and whiteness through generations. It is 10% brighter than a diamond, and it reflects light in hypnotic bursts of fire. It is also one of the hardest elements known on earth, which makes it extremely tough. It is available in a variety of sizes and shapes.

Moissanites are therefore an excellent alternative to diamond, but despite the striking resemblance between moissanite and diamond, several elements differentiate them. So that you can make an informed decision, take the time to discover this particular stone and choose between diamond and moissanite according to your priorities.

Price of a moissanite

Moissanite is a very attractive stone; its price is a very decisive element. Moissanite gems cost a fraction of what a real diamond costs if you compare the same size and quality. The savings on the purchase of a large cut stone is enormous, for example a 1 carat moissanite can cost 650 dollars depending on its quality, while a GIA certified diamond of 1 carat can cost around 5,000 dollars and more depending on the quality. The more original shapes of diamonds are even more expensive, since the loss during cutting is greater.

The moissanites known on the market today are manufactured by the Charles & Colvard Company in the United States. The quality of the moissanite they produce is recognized worldwide, as they were the first to create an X-shaped gem-quality moissanite. They developed three types of moissanite: Forever Classic, Forever One, and Forever Brilliant.

It is the first moissanite created by Charles & Colvard; it offers a stone of good hardness, but with shades of green, yellow and gray. It corresponds to the color diamond JK.

Thanks to the improved crystal growth process, they were able to achieve a better range of moissanite, which is shiny and almost colorless. It corresponds to a GHI color diamond. It is an interesting option since it represents the good understood cost quality for this stone.

Years of research and high technology have enabled Charles & Colvard to offer high quality stone to the market. Breathtaking shine and perfect white color, it is similar to DEF colorless diamond.

In the past decades, Charles & Colvard were the only manufacturers of moissanite since they held its patent. But since 2016, the patent has expired and other competitors have emerged like Moissanite International. It is an Australian company that offers amazing moissanite stones named supernova moissanite. This moissanite is at the same level of quality as the Forever One moissanite and therefore offers a colorless range equivalent to the DEF diamond.

For a better quality-price ratio, you can choose SUPERNOVA moissanite for wedding ring, it will be accompanied by its certificate of authenticity and guarantee, produced by the manufacturing laboratory.